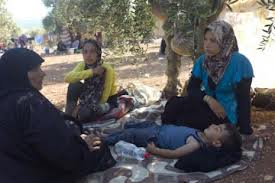 “Human Rights Watch interviewed a dozen women who described being groped, harassed, and pressured to have sex,” the New York-based group said in a statement.

While some of the women described repeated assaults, they said they did not report the incidents to the authorities “due to lack of confidence that [they] would take action and fear of reprisals by the abusers or arrest for not having a valid residency permit.”

Lebanon, with a population of just over four million, is hosting more than 800,000 Syrian refugees, according to the United Nations refugee agency (UNHCR).

According to the United Nations, 75 percent of refugees fleeing Syria are women and children, and face heightened vulnerability in neighboring countries where services are scant and overstretched.

HRW tells the story of Hala, a 53-year-old from Damascus, whose husband is detained by the Syrian government and who cleans homes in a Beirut suburb to support herself and her four children.

“She told Human Rights Watch that she suffered sexual harassment or attempted exploitation in nine of the 10 households in which she had worked,” said the group.

“Male employers tried to touch her breasts, coerce her into sex, or procure her 16-year-old daughter’s hand in marriage,” it said.

Zahra, a 25-year-old from Homs, said her employer in northern Lebanon “grabbed her from behind, touched her breasts and pressured her to have sex. She left the job but said she was sexually harassed by two other shopkeepers for whom she worked.”

She stopped working after the repeated assaults, though her family had relied on her income to pay the rent, the group said.

The human rights monitor urged the Lebanese government and the United Nations to “improve mechanisms for submitting sexual abuse complaints and ensure that refugees are not punished for filing complaints.”